“March for a Fair and Comprehensive Immigration Reform”

My husband and I arrived at Leech Grove Park at UTEP at 4PM.  There were a few people mingling here and there in the grass and sidewalks.  I spotted a few of my classmates sitting at a picnic table.  I turned on my video camera and my husband also began taking pictures as people began arriving from no less than 4 buses. 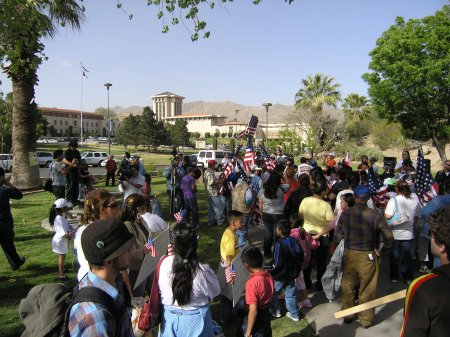 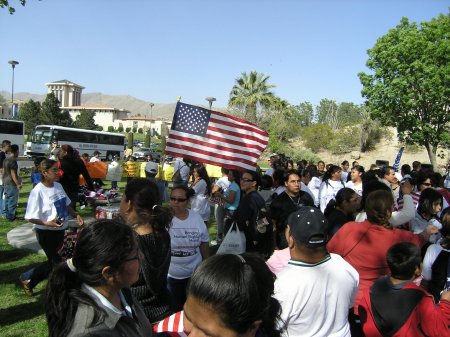 It began getting more and more crowded as other people randomly walked into the park from all directions.  Children were holding signs that said things like, “NO SEPAREN A NEUSTRAS FAMILIAS,” and the same in English, “DON’T SEPARATE OUR FAMILIES.”  Some others said, “QUERROS RESIDENCIA PERMANENTE AHORA,” and “WE WANT PERMANENT RESIDENCY NOW,” and another announced, “DO NOT CRIMINALIZE OUR DREAMS.”  Television cameras and their operators were gaining in number, and video cameras, digital and film cameras, and even pictures being taken by cell phone users were everywhere.  Next came in the American flags.  Large ones, and a box full of small ones were handed out, and the wind blew them so their full length was visible. 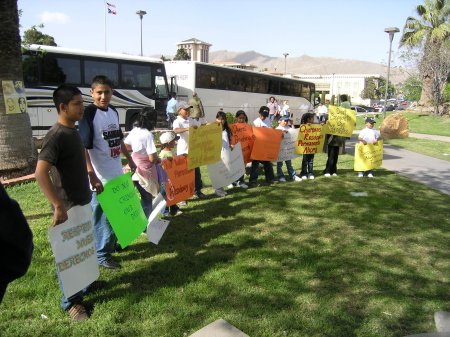 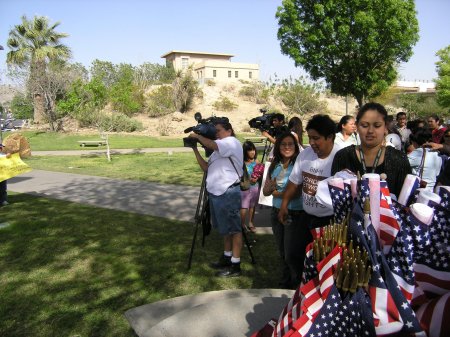 The PA system was set up and a man and woman began talking, announcing the beginning of the march.  They spoke into the microphone, with their voices blasting the ears of those who stood too close to the speakers, getting people in the mood to repeat chants in Spanish for the cause.  The march for immigration reform was about to begin. 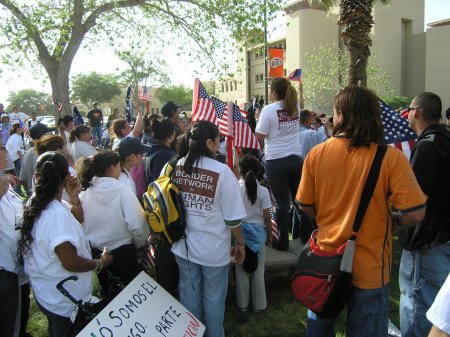 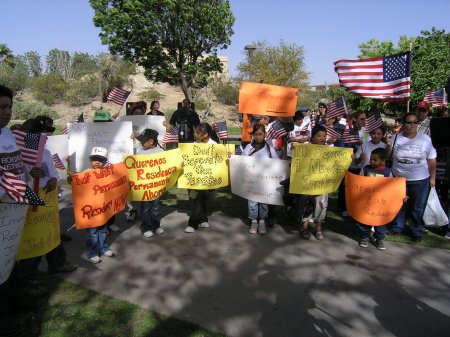 I turned the video camera on while we marched out of Leech Grove Park and into University Avenue.  The line of people was about 15-20 feet wide, and a good block in length, walked with banners, flags, and homemade posters held in dozens upon dozens of hands.  Chants repeated over and over as the lady with the megaphone blurted her words toward the crowd so they would chime in. 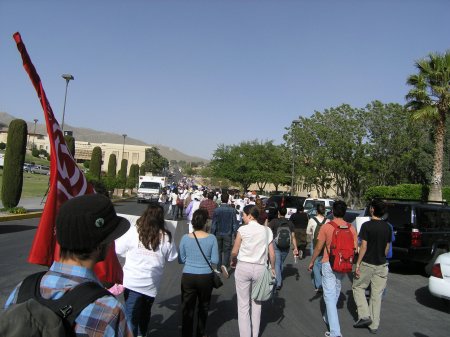 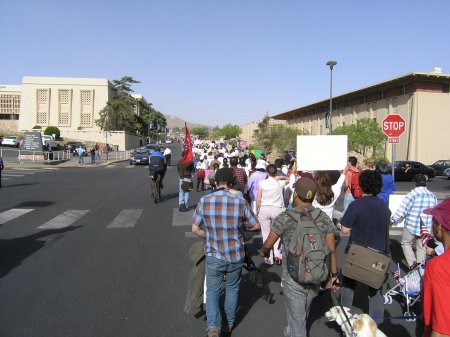 We arrived at Oregon street and turned right, heading toward downtown El Paso.  Cops on motorcycles followed close by, blocking side traffic and giving the marchers leeway. 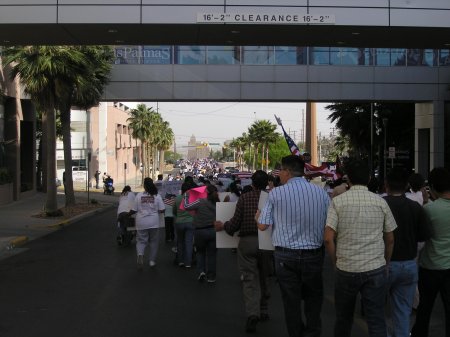 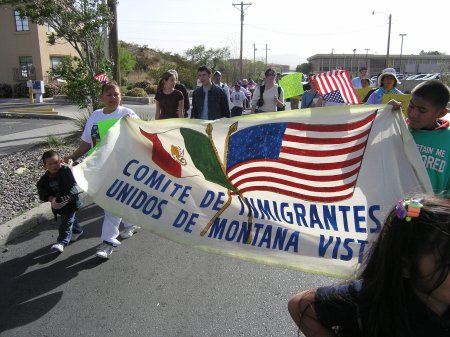 Once we walked to Schuster, my husband and I stepped aside, got in our car (parked a block away) and drove downtown.  By the time we got there, and found a parking spot, and threw some money in the meter, the marching crowd was heading straight for us.  We took front camera shots of the march as they headed toward Plaza de los Lagartos (the park area near downtown).  I spotted signs being carried by people that said things like “Agua Dulce,” (Sweet Water) “Segundo Barrio,” (name of a poor neighborhood in El Paso) and “Civil Rights Project” – the latter being the very place where I have been doing my Praxis service learning (volunteer) work all semester long.  By the time the crowd of people passed us, we hopped quickly into the back of the line again (where the rest of my urban anthro class was at). 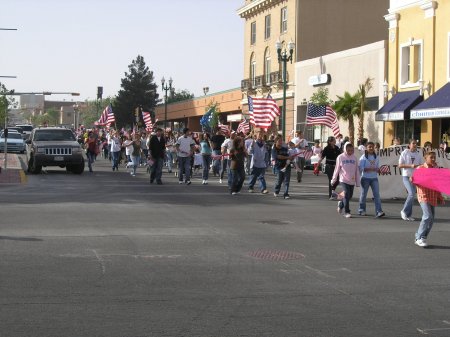 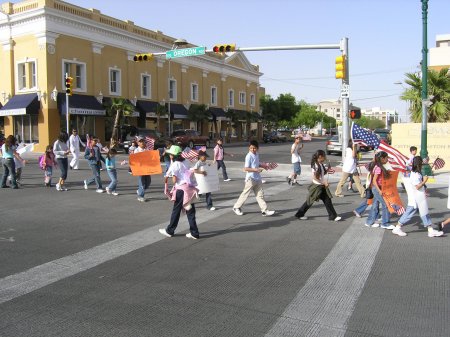 Finally, we arrived at the Plaza, and the marching people (us included) walked around and into the center of the plaza.  I saw two nuns, and other people with signs and banners. 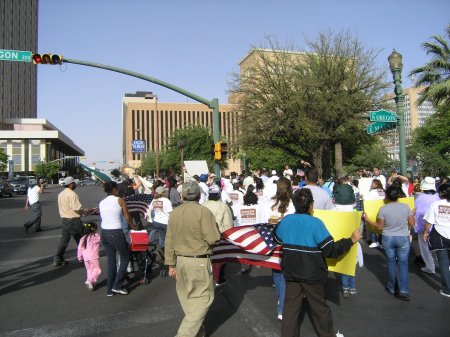 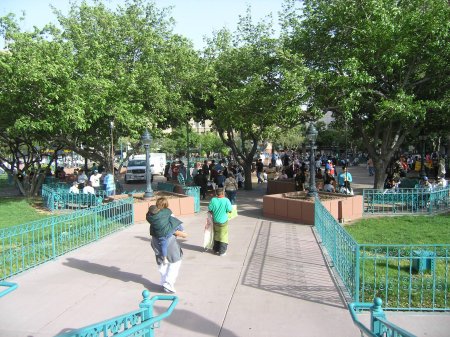 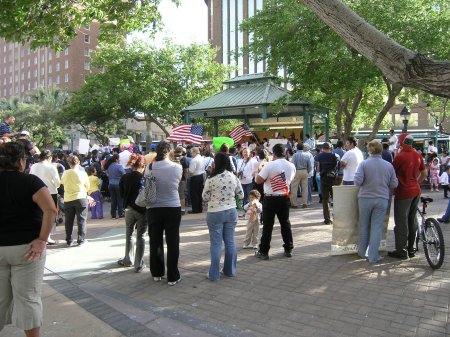 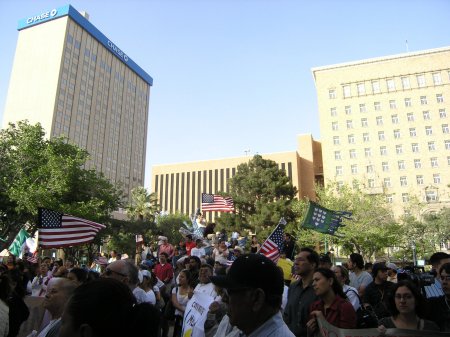 One fellow, who was dressed in black, was an anti-protester, holding a sign that said, “CRIMINALIZE ILLEGAL RESIDENTS” and on the other side (since he kept flipping it around occasionally) it said, “PRESIDENT BUSH, HOMELAND SECURITY – YES, AMNESTY – NO”.  Everyone seemed to ignore him, and one time I saw some girls standing and holding their own signs up in front of him, blocking his view and his written statement(s) to the crowd.  He gave up and stepped down for a minute.  He was far more cordial than the religious protestor I saw once at a Gay Pride parade in Colorado Springs, Colorado a few years ago.  I was thankful this rally was uneventful in regards to the hate-crimes and prejudices that can sometimes erupt. 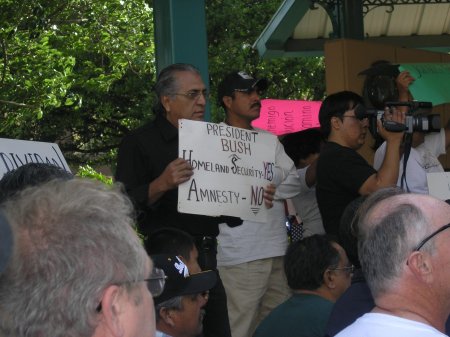 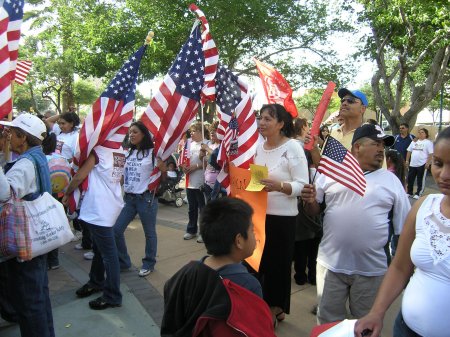 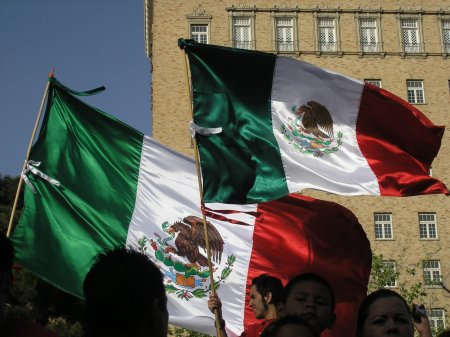 Speakers got up one at a time… both women and men.  The crowd cheered and clapped, with each one taking their turn and giving their input on the immigration issue at hand.  The march was for a new immigration reform and to protest raids in the workplace (a form of selective victimization).  The proposed bill would require undocumented immigrants to cross the border and come back, and although there are some who are eager comply, there are others who aren’t – family members who have been in the U.S. for a decade or more don’t wish to be separated from each other, but to stay together instead. 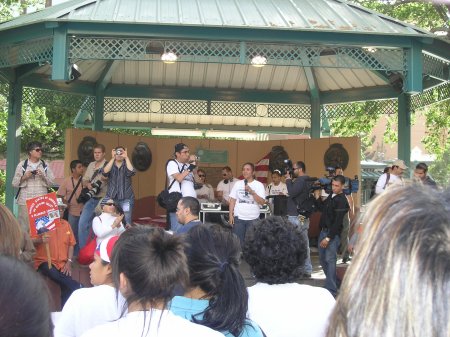 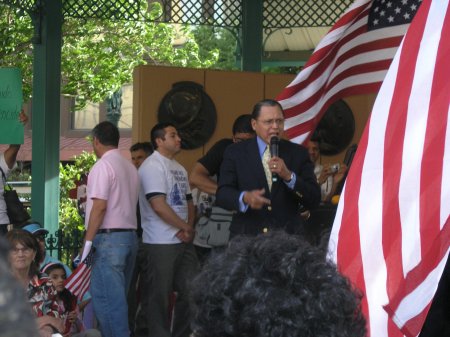 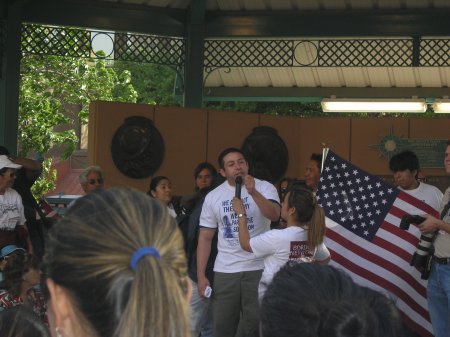 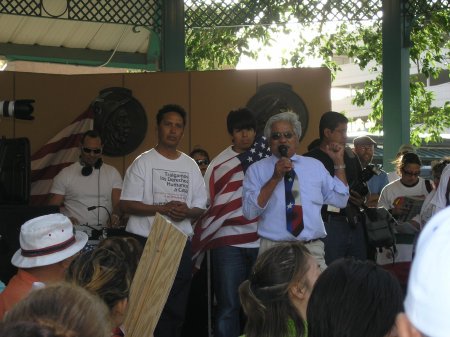 After we left the rally my husband turned and told me that he enjoyed participating in this march; and in fact, I did too!   I felt very honored to stand by the children, parents, and other supporters of basic human rights, which should be treasured rather than criminalized. 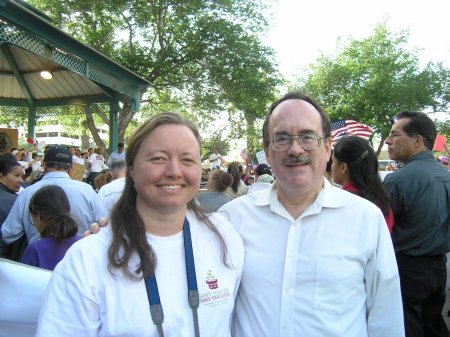 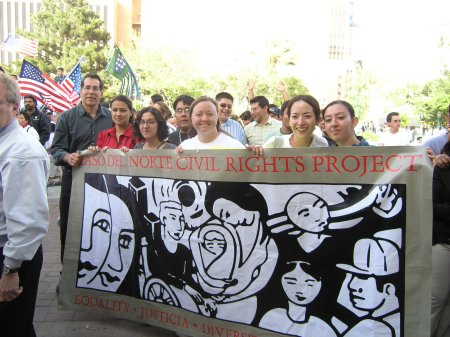