So much is going around the Internet about fears of radiation from the nuclear power plant(s) in Japan in case there is a (partial) meltdown since the 8.9 earthquake on March 11, 2011. Many people in the U.S. are buying potassium iodide (KI) pills/tablets, but for them to be of any real help would require HIGH doses of radiation within a 10-mile radius (source: NPR). Chances are that the doses one would receive in North America from Japan, a distance of approximately 5,000 miles (8,000 km) to the west coast, would be negligible.

Still, many are worried (perhaps needlessly), and others say “better to be safe than sorry” and are stocking up on food, water, gas in their cars, and high-iodine containing foods such as kelp, saltwater fish, etc. Below are a few links and snippets or graphs/charts that I’ve put together on these subjects, to give the reader some further information.

Nuclear accidents have happened before… one incident we can compare is the Chernobyl nuclear power plant disaster that occurred in 1986. We can use this event to help assess how the wind patterns and distances and danger levels occur over vast distances, which is something we can expect from any possible meltdown in Japan. Although a meltdown would first have to happen, it would also have to be evaluated on its own merit, depending upon what happens, the amount of radiation released, the distances involved, weather patterns and the jet stream, and so on. 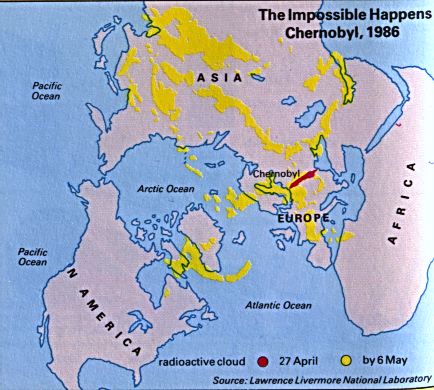 As you can see, the levels of dangerous radiation did not make it around the globe, but landed in certain areas depending on the weather. This will also be the case with Japan if there were a meltdown. Knowing the basic trade winds across the Pacific Ocean will come into play for any possible radiation making it to the U.S. Remember that most of Chernobyl’s fallout occurred within 400-1200 miles, with the farthest reaches of weakened fallout scattered up to 4,000 miles away. Japan is more than 5,000 miles away from the closest point (the west coast) of the U.S.

NOTE: This picture represents a snapshot of the predicted weather pattern for March 20, 2011

A common cancer linked to radiation poisoning (from a CLOSE range of a nuclear explosion) is thyroid cancer, which is why people take iodine, or potassium iodide pills; however, there can be side effects with taking them, or even from an intake of too much iodine. Iodine itself is radioactive, but then, so are bananas, rocks, and there is even radiation in the background from everything all around us.

A chart, including the Fukushima radiation, showing amounts of radiation and their measurements can be found here:

Iodine from food sources is natural and easily obtainable, not to mention healthier than potassium iodine pills – not that we would need them anyway in the U.S. since the 5,000+ mile distance would deplete much of the radiation from the atmosphere, especially as it falls with the rain over the Pacific Ocean, not to mention the rainshadow effect of the west coast mountain ranges.

SOURCES OF IODINE FROM FOOD

Adults only need 150 micrograms of iodine each day – much more than that can cause health problems and risk for other serious health issues. (source: http://www.ehow.com/about_5393721_dangers-iodine-supplements.html)

Kids usually love the dried laver seaweed sheets, which is a salted/seasoned and crunchy snack – available at most Oriental or Asian food stores/markets. Nori is the seaweed that comes in flat sheets (dark green paper-like sheets) for rolling up rice and vegetables, which is also good (used with or without sushi). There is also the dried brown seaweed (a rich source of natural iodine, and a little bit goes a long way!) that expands when wet, used most often in soups (Korean soup called Miyeokguk)… just a Ľ of a cup per day gives a whopping 415 mcg of iodine, according to the chart above! I would personally recommend eating seaweed in one or more of these forms if you want iodine. It is just an all-around healthy way to go regardless of radioactivity scares. 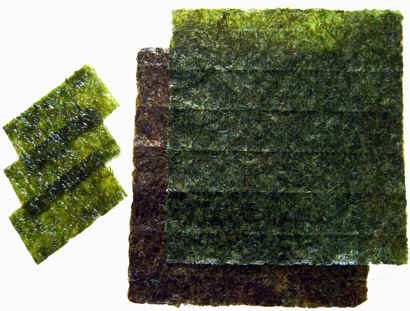 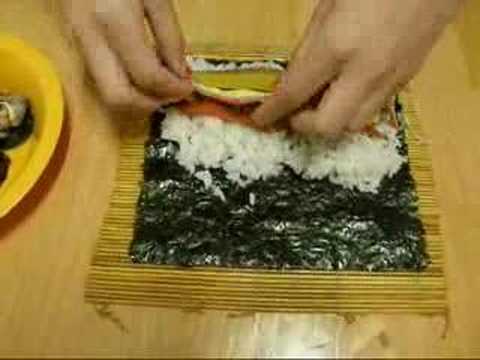 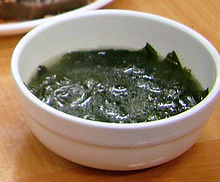 (pictures from a google search for “kids eating laver seaweed”)

FOODS THAT INTERFERE WITH IODINE ABSORPTION

“There are certain food compounds known as goitrogens, that hinder the absorption and utilization of iodine by the thyroid gland.  Foods that have goitrogens include the cruciferous vegetables like broccoli, Brussel sprouts, cabbage, cauliflower, kale, mustard and turnip.  Also soy and soy products like tofu, and cassava root, millet, peanuts, peaches, and strawberries.”

Please remember to be safe, eat healthy, feel at peace, and enjoy life! Our “worries” are nothing compared to what those in Japan have been going through. Keep Japan and those who live there in your hearts, thoughts, and prayers; and more importantly, donate to reliable organizations that are helping them directly, since the aftermath of the earthquake(s), the tsunami that followed suit, and any potential nuclear disasters.